How Selective Is Your Attention?

Why do we notice a remarkably beautiful person in a crowd, or pay attention to the sound of screeching car brakes cutting through the noise of traffic? 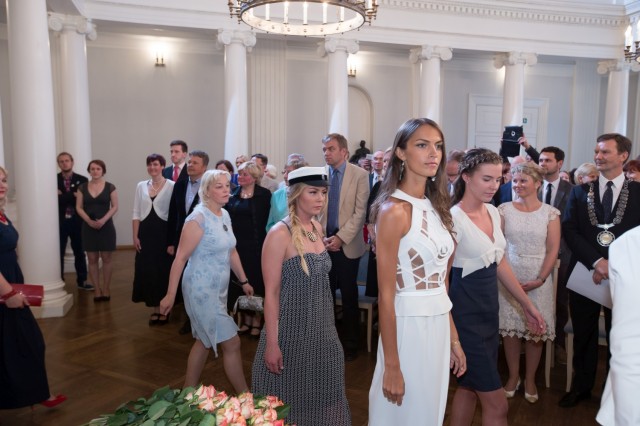 Why do we notice a remarkably beautiful person without any effort? Our affective attention leaps into action before we know it. Image credit: Andres Tennus

According to Andero Uusberg’s doctoral thesis, defended at the University of Tartu, this might be so because the brain processes emotional information in an accelerated manner.

The brain is equipped with various attention mechanisms for sorting out important stuff from potentially overwhelming sensory input. While top-down attention enables us to concentrate on the task at hand, and bottom-up attention to remain vigilant for unexpected aspects of the environment, there is also a third system that is sensitive to emotional information. This mechanism, referred to as affective attention, is responsible for spotting opportunities such as a valuable mate or threats such as a traffic accident.

Scientists still do not fully comprehend what exactly is going on in the brain when different attention systems compete with each other. As an example, consider the reader of an online news story whose eyes also capture a juicy sensational headline in the sidebar. Sometimes affective attention wins and the gossip story receives the anticipated click. But sometimes deliberate attention is able to push away the insignificant bait, so the person can go on reading the story.

In his doctoral thesis, Uusberg scrutinised the possibility that in the competition between attention systems a change in leaders occurs during the first third of the first second. In the start position, emotional attention reacts faster, but after approximately 350 milliseconds the top-down attention system has settled the score. After this crucial moment, the focus of the brain is directed in cooperation.

Many predictions about such a thought model have been proven through analysing the brain’s electrical activity when the particular ‘guinea pig’ was observing emotionally loaded photographs. More broadly, the different starting speeds of the attention systems offer an explanation as to why an essentially harmless stimulus such as the distant sound of grinding halt still tends to grab one’s attention. It takes a moment for the more context-aware top-down attention system to correct the early reactions of the more primitive affective attention.

One can find many hints here for regulating everyday emotions. Sometimes, when someone wants to cope with an unpleasant medical procedure or some other alarming situation, it is suggested that thinking about something else would help. But Uusberg’s study showed that such a strategy is more successful when the thought is turned towards something sufficiently complicated. When the ‘guinea pigs’ were asked to imagine walking in their hometown in detail, the intensity of getting into the content and reacting to the emotionally loaded pictures decreased. On the other hand, when the goal involved concentrating on neutral traits of the emotional pictures, affective attention weakened just a bit. So, in emotionally challenging situations, try to focus on something different that demands your full attention.

This entry was posted in Research, Social sciences, Tartu and tagged affective attention, attention, attention system, PhD, PhD thesis, psychology. Bookmark the permalink.
This website uses cookies to improve your experience. We'll assume you're ok with this, but you can opt-out if you wish.Accept Read More
Privacy & Cookies Policy
Necessary Always Enabled