Before I joined the University of Tartu in autumn 2016, I worked at the Namgyal Institute of Tibetology as a Research Assistant. Among many other projects, I was engaged in documentary film making and in translating, transcribing and interpreting proverbs and sayings. I am from Sikkim (Beyul Demojong which means The Hidden Land of Fruitful Valley) which was a former Himalayan Buddhist Kingdom (for 333 years) but is now the 22nd state of the Indian Union since 1975. I hold a Master Degree in English Language and Literature from the North-Eastern Hill University in Shillong, Meghalaya, India.

I came to know about Tartu from my friend Margaret Lyngdoh, as she previously also studied in Shillong, from where I got my master’s degree. Margaret defended her PhD in 2016 at the University of Tartu in the Department of Estonian and Comparative Folklore. She suggested me to write a research proposal and approach the professor of the department Ülo Valk after knowing my serious interest in pursuing my studies. I had never heard about Estonia before but after coming here I realised it was a privilege to have got this opportunity! In the cold yet warm environment, surrounded by the people who are equally passionate about their culture and equally interested to know about yours.

My research interest concentrates on Sikkim’s sacred landscape. More specifically, it revolves around belief narratives as seen through the windows of prophecies, pilgrimage, and patronage. In the Sikkimese context, the patronage, prophecies and pilgrimages are interlinked and play a vital role in making the sacred landscape alive, or to some extent –continuous – which I want to examine in detail in my thesis possibly. My work grows out from researching my own community, the Bhutia, and is an exploration of the beliefs, values, stories, and rituals I grew up with. I like to see my research both as an academic endeavour and a quest towards a better understanding of “the self”.

Tashiding Chorten Area which is one of the main location for my research. Photo credit: Phurpo T. Bhutia

Previously, when I was working as a Research Assistant in the Namgyal Institute of Tibetology, my main motivation was to document and preserve (and to some extent, revive) my own culture. For instance, I interviewed elders who provided me with interpretations and usages of traditional proverbs. I also invited resource-persons, who had a good command over the local language (lhokey, bhutia) to act out the proverbs, which we subsequently uploaded online (“Sikkim’s Proverbs and Sayings”) to promote and preserve this source of traditional knowledge and culture. This is one of the various ways in which my research has been able to create awareness about our culture and traditions. We already have over 1000 followers, mostly Sikkimese Bhutia (denjongpo), and we receive many stories from people who share proverbs they have learned from their elders.

The goal of my research scholarship is to carry out innovative research within my own community to better understand my own traditions and culture as well as to contribute back to it. I believe that my scholarship at the University of Tartu provides me with boarder theoretical understanding of the local belief system in my research field. Along with that, the interaction with people researching different fields in our department provides me with larger understanding of different topics and approaches in which I can further sharpen my understanding about folklore. To overcome the insecurities of fearing the remnants of the remaining culture, and revitalize and revive whatever is left of it – that is what people in Sikkim as well as Estonians hope for.

It has been 6 months since I came to Tartu. I have met many people from different cultures and countries and I am grateful for the opportunity of learning and broadening my knowledge about different cultures. Living and studying in Tartu has been very pleasant. The cold weather but warm gestures and always helpful people makes it impossible for you to get lost and get in difficulty of finding the right places. The intellectual interactions in my department and helpful friends and faculties are the gem in the whole great surrounding of the University of Tartu. 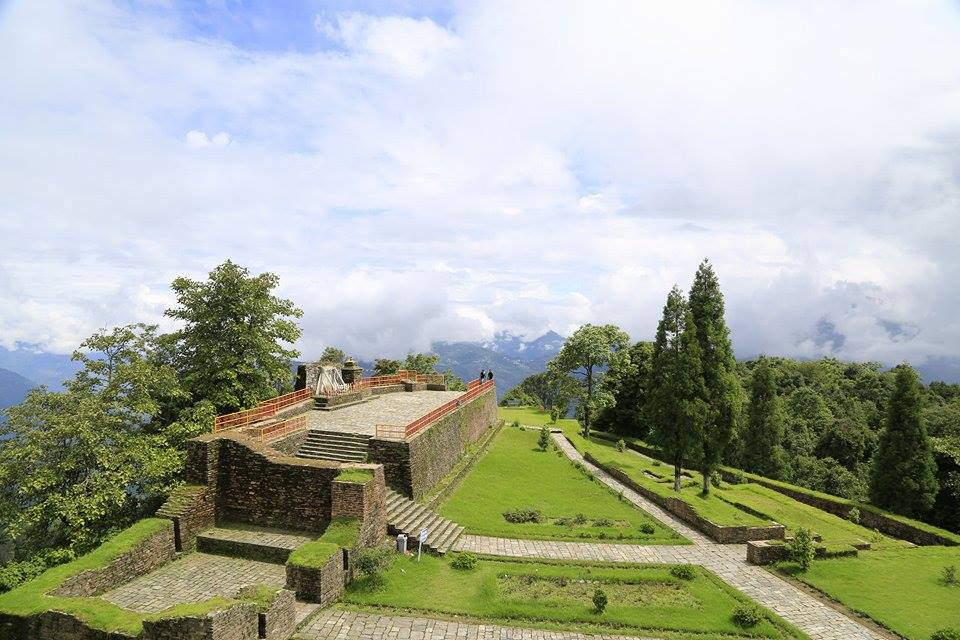 Ruins of the Rabdentse Palace which was the second capital of the former Kingdom of Sikkim 1670-1814). The capital city was destroyed by the invasion of the Gurkha army and only ruins can be seen now. Photo credit: Takzen Lepcha

Would you like to experience Tartu yourself? Are you interested in the roles folklore and heritage play in your life and that of others? You can now apply to our new English-language Master’s programme “Folkloristics and Applied Heritage Studies” launched in Fall 2017. This two-year programme will provide you with knowledge and skills to unpack the process of heritage production and the workings of tradition in the context of cultural diversity and change.

The University of Tartu has what it takes to provide a broad, yet rigorous approach to folk culture and cultural heritage. The faculty to student ratio is excellent and students are given individual attention. Large optional course module and practical training module enable you to pursue your professional aspirations. No tuition fee for most students!

This entry was posted in Career, Estonia, Humanities, Research, Student life, Studies, Tartu and tagged beliefs, folklore, patronage, PhD, pilgrimage, proverbs, rituals, values. Bookmark the permalink.
This website uses cookies to improve your experience. We'll assume you're ok with this, but you can opt-out if you wish.Accept Read More
Privacy & Cookies Policy