What’s the connection between a person’s worldview and the risk of becoming depressed? 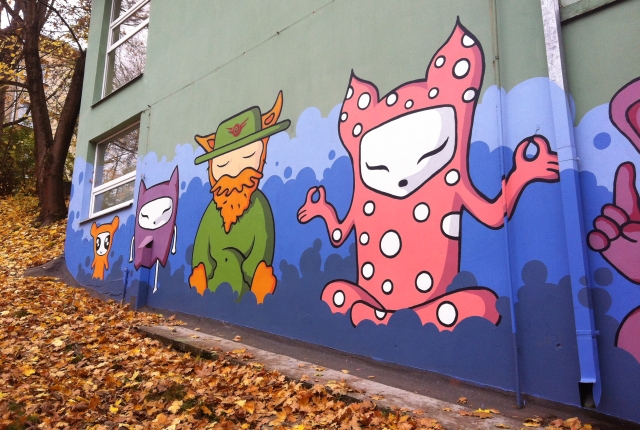 Graffiti of meditating creatures in Tartu. A recent international study shows that religious people or those engaging in spiritual practices are also more depressed than others. Image credit: Inga Külmoja.

Research by psychologists has indicated that religious persons see themselves as happier. Then again, most of the research has been conducted in the US, where approximately 80 percent of the population claims to be connected to some church or sect. Surveys made in other countries provide conflicting results.

For example, studies have shown that people turn to religion when facing serious hardships and that religious people are happier than non-religious, primarily when in harsh conditions and religious societies.

An English study found that persons who see themselves as spiritual but do not follow any specific religion are more restless and depressed. This could have many possible reasons. Those with a diagnosis of depression may be more interested in self-help and spiritual movements than the average person. Soul searchers of fragile mental health can do poorly when there’s no support from a church or congregation.

Recently, an international survey was led by researchers from the University of London to figure out if doctors could predict depression from their patients’ worldview. Family doctors from different countries questioned nearly ten thousand people. The study encompassed Great Britain, Spain, Slovenia, Netherlands, Portugal, Chile and Estonia.

This is just a small facet of a greater study on depression. The results include the revelation that a quarter of Estonian family doctors’ patients suffer from depression. Depending on the country, the results varied greatly: In Slovenia only every tenth person that reported to a family doctor had depression; in Spain, on the other hand, almost every third person had it (29 percent).

In the fresh study, a query about worldview was used where religiousness was defined as constantly belonging to some denomination and following its practices, i.e. going to the church or mosque.

‘Spirituality’ represented the situation wherein a person might not follow a specific religion but still believes that there is some kind of higher power that steers people’s destinies. In extreme cases such persons might be preparing for world domination by reptiles or believe that sleeping in a pyramid-shaped building can fix ‘life energies’.

When a person said that he or she was religious or spiritual, a question regarding connection to some specific denomination was asked. The person then had to evaluate the strength of his or her worldview and beliefs.

Additionally, respondents filled out a questionnaire designed to rate symptoms of depression and had to talk about earlier periods of depressed states and traumatic events from the last six months.

One of the authors of the study, Heidi-Ingrid Maaroos, Professor Emeritus of the Faculty of Medicine at the University of Tartu, said that the analysis was centered on severe depression.

Data from 923 Estonians was used. According to Maaroos, the study confirmed Estonians’ lukewarm attitude concerning religion: Only 4.3 percent thought of themselves as religious, placing Estonia in last place amongst the countries concerned. In comparison, in Chile the religious constituted 33 percent and in Portugal 19 percent.

Spiritual beliefs are much more popular among Estonians than conventional religions, as one participant in eight admitted these. In this respect, Estonia resembles Great Britain and Slovenia, where such beliefs are only a little more popular than here. Portugal, on the other hand, distinguished by great number of religious people, is quite indifferent when it comes to spiritual practices — only 4 percent admitted following these.

After analyzing data from each country, it turned out that 10.3 percent of religious people had had at least one severe episode of depression during the year. 10.5 percent of people with a spiritual worldview fell into deep depression, while for secularists the number was 7.

The results varied widely depending on the country, but as a general tendency, religious values increased the likeliness of depression. In addition, during the year the religious had depression more often than the non-religious, e.g. in Great Britain the difference was three-fold. The results could not be explained by the importance of religion in the country. In their statistical model, the researchers considered data from sociologists about the religiousness of the population in all of the countries.

According to Maaroos, it is clear that the religious, as well as those who follow various spiritual practices, suffer more depression. “It still remained unclear if being vulnerable to depression makes them more prone to religion and different spiritual beliefs, or if these beliefs cause depression. Our study didn’t allow us to find any causal relationships but it did prove that the links between religion and depression are complicated”, she noted.

In addition, the link between strength of faith and depression risk was discovered. The more religious people thought themselves to be, the greater the risk of severe depression.

Individuals usually have a rather stable worldview. 27 percent of participants measured their viewpoint towards religion and spirituality after six months had passed. This had little impact on becoming depressed. Religiousness did not influence the onset of depression in these people who had recently undergone hard times either.

This entry was posted in Estonia, Research, Social sciences and tagged depression, mental health, religion, religiousness, spirituality, worldview. Bookmark the permalink.
This website uses cookies to improve your experience. We'll assume you're ok with this, but you can opt-out if you wish.Accept Read More
Privacy & Cookies Policy