The United Nations of Tartu: Compact Town with an Infinite Horizon

Posted on August 7, 2014 by Frederik Declercq 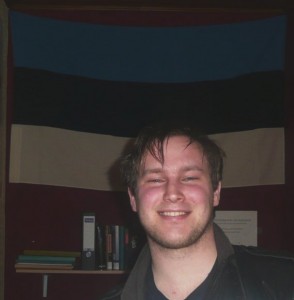 Estonian flag in my bedroom

A few weeks ago, I was cleaning up and encountered my degree as an exchange student in Baltic studies, autumn semester 2008. It surfaced great memories, not to say the best ones in my life up to day. Indeed, my experience as a University of Tartu exchange student was amazing from the beginning until the end and left traces that still impact my present life (reaching way further than the Estonian flag in my bedroom).

Coming from Belgium, it was considered an unusual choice by my friends and family to study abroad in this “unknown” northern country. But even if I could choose for the obvious destination and hence go south like most of my fellow students, I didn’t have to think long about my choice. After doing some research, I learned about the very good reputation of this Baltic university, as well as the vibrant Tartu student life. What’s more, one of the main reasons why my exchange experience in Tartu went beyond my expectations, is the huge effort and amount of initiatives that the university implements to foster a terrific period for all its visiting students.

Living in Tartu and absorbing the Estonian life, the most striking thing for me was the exclamation of Estonian culture and habits, as well as the deep respect for nature. Altogether, this is the binding glue and oxygen of Estonians. In the many places I’ve visited during my stay (Pärnu, Viljandi, Otepäa, Tallinn, Rakvere, to name a few), the feeling of unity to be part of a distinguished population was unseen for me. That’s what made me fall in love with Tartu too, a feeling you can only understand once you’ve studied there. This is just one out of many reasons why studying abroad is much more than following interesting courses that approach subjects from a different angle.

Furthermore, the great thing about Tartu is its size: in a relatively concise environment, you have so many initiatives and meet people from all over the world. It really feels like seeing the whole world in a small box instead of being swallowed in a massive hectic crowd in which you lose yourself to an unidentified object. This dense community of both international students and Estonians make it for everyone a warm and welcome place, opening doors to engage in social and cultural activities. 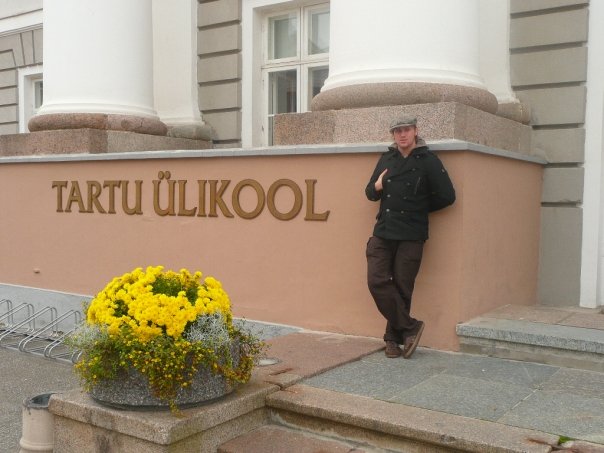 Me in front of the university Main Building

And the many great people that I encountered, will remain invaluable contacts for the rest of my life. I make reference to my Georgian friends being the best hosts when I travelled in their country; as well as the delicious traditional Lithuanian and Polish cuisine during my stay in both countries, the unforgettable music festival that I attended with my Czech roommate and the job opportunities that I received from a German fellow. Not to mention the times that I hosted with great pleasure Spanish, Hungarian, Italian or Finnish people at my home in Ghent or helped an Estonian girl to find a room when she came here as an exchange student. This “give and receive principle” is so satisfying, a tremendous power resulting from my experience in Tartu, which undoubtedly can be considered a milestone in my lifespan.

In this respect, I completely agree with Yana Toom – Estonian coordinator in the Cultural committee of the European Parliament (ALDE group) – who states that studying abroad can greatly contribute to acquiring additional skills valued by employers such as languages and flexibility: “The Erasmus program is not just about investing in education in other countries, thereby broadening the horizons of students. Erasmus clearly strengthens cross-cultural communication and mutual understanding, and enables young people to experience the very rich, colourful and beautiful mosaic of diversity in Europe.” Parameters that are indeed valued by my current employer.

Oh yes, I also would definitely suggest to learn Estonian, even if it is one of the most difficult languages in the world. As most visiting students follow their courses in English, one should simply start loving the “Estonian English”, as Estonians have one of the most adorable accents in Europe. Want to know what it sounds like? I guess you’ll have to go to Tartu to figure it out yourself! “Nägemist” (Bye)!

This entry was posted in Estonia, Student life, Tartu and tagged alumnus, Baltic Studies, Belgium, Erasmus, exchange experience, exchange student. Bookmark the permalink.
This website uses cookies to improve your experience. We'll assume you're ok with this, but you can opt-out if you wish.Accept Read More
Privacy & Cookies Policy
Necessary Always Enabled