Yuxuan Chen: Estonian Small Cities Give Me a Peaceful Feeling

This blog post was originally published in the Multicultural Estonia website, compiled by the international students from the Johann Skytte Institute of Political Studies.

Two years ago she moved to Estonia from China to enroll in the EU-Russia masters programme, a year and a half ago she married an Estonian, and today she works full time. Close to the end of her MA degree, Yuxuan’s life is divided between study, family and work. She can combine all of them without a problem, and she is excited about her future in the small city of Tartu, especially if compared to Beijing.

Yuxuan came to Estonia for the first time as an exchange student during her bachelor’s studies. At that time she was studying English Language and Literature, but the University of Tartu offered her a wide range of courses from various faculties, allowing her to choose as many classes as she could handle. Thanks to this opportunity, she frequently visited the faculty of social sciences, and eventually found the EU-Russia studies programme, to which she decided to apply. 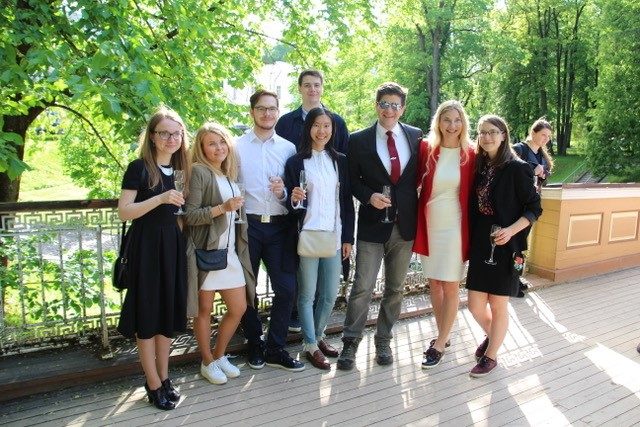 The moment when Yuxuan and her coursemates knew their defence results and were celebrating with their professors. Yuxuan is in the middle of the photo. Photo from a personal archive.

“Tartu is surprisingly international, so small but so international!” The differences with Beijing are enormous: “China is mono-ethnic and limited by censorship, while in Estonia people are free to come and to openly express their opinions. For example on social media, you do not have to worry about saying something wrong or unpopular.” Also, coming from the big chaotic Chinese capital, Yuxuan appreciates population density (or should we say sparsity) of Estonian small cities surrounded by the calm nature.

“Tartu is not dense, and this allow you to easily walk in the city center. The fact that there are not as many people as in my home country increases my quality of life. I like the peaceful feeling that Estonian cities give me. And, I love Estonian nature: forests and no people around.”

During her academic studies, Yuxuan found a job. When asked her how she managed to combine a full time job with a full time study, she said: “I tried to complete most of the curriculum requirements by the first year, when I did not have a job yet. And, later I somehow managed to study in the evening and weekends, while I worked full time during the weekdays.”

Her future plans are to stay in the Baltics, she’s not considering the option of moving back to China, especially because at the moment she highly enjoys her job: “It is future-oriented and has a lot of potential for a career in this field. I do see my future in Estonia.”

Not knowing the Estonian language is not a problem for her future plans, given that the locals speak English, which is also the language of her workplace. Communication with her husband is in English as well, however Yuxuan only understands a little Estonian. “I understand the basics but I cannot really communicate, and it can be a problem sometimes”, she admits. “Whenever we (her Estonian family and her) organise any events together, I cannot expect them to speak English all the time.” She doesn’t feel socially excluded. Rather, as she honestly confessed, she is taking the language barrier as a motivation to learn Estonian. 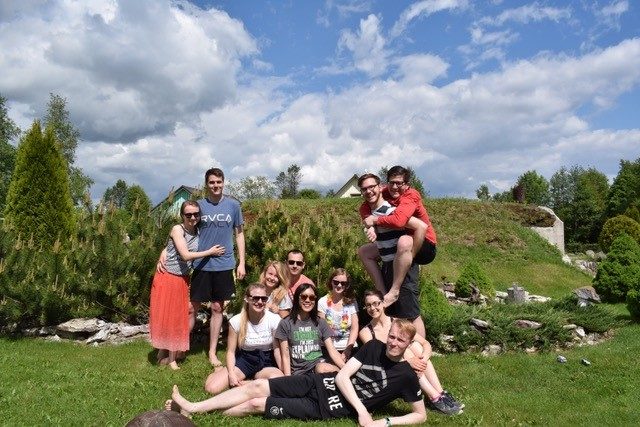 Graduation trip to Mustvee. We are a family! Photo from a personal archive.

Yuxuan is willing to learn the language of her new country as well as she is motivated to know the culture of Estonians. “What interested me the most is the youth culture, how the young generations think and behave”, she pointed out, also adding that she often takes part in events aimed at young people, such as the startup events that connect young locals and foreigners to the world of work. In these kind of events she has the opportunity to get in touch with other students coming from diverse backgrounds, with different opinions and views.

According to her, the variety of backgrounds is among the factors that shape Estonian identity. Overall, she understands this identity as “a mixed picture of Soviet legacy and Western influence”.

During these two years, she has learned a lot about this little country and its traditions, she has been able to integrate into an Estonian family and to appreciate the differences between her culture and the Estonian one. Nevertheless, there are still few things which continue to surprise her: how much Estonians can drink and how they can cope with minus zero degrees wearing spring clothes.

This entry was posted in Career, Estonia, Social sciences, Student life, Studies and tagged beijing, China, EU-Russia studies, graduate, international student. Bookmark the permalink.
This website uses cookies to improve your experience. We'll assume you're ok with this, but you can opt-out if you wish.Accept Read More
Privacy & Cookies Policy
Necessary Always Enabled